DC’s Comprehensive Plan is the city’s central guiding document for how development proceeds in DC.

The Plan has undergone several amendments since 2006, the year when this version of the Plan was adopted as law by the DC City Council and Mayor. According to the law, the Plan is to be implemented over a 20-year cycle and a major “rewrite” in scheduled to occur in 2026.

However, the Mayor is seeking to dramatically change the Plan now, essentially a rewrite, largely because the D.C. Appeals court has recently granted DC residents relief from harmful development projects based on arguments that center on violations of the Comprehensive Plan.

In direct response to the people of DC using the Courts to fight back against runaway corporate development, the well-connected developer-class has joined forces with their nonprofit front groups and friends in the Mayor’s office to use the opportunity of the amendment cycle to rewrite the Plan and significantly weaken language in Plan policies to eliminate community dialog and input and to throw the door open for increased gentrification and displacement throughout the city.

The DC Grassroots Planning Coalition has been actively engaging DC residents for years on the Plan to help understand this document and how it affects all communities and people citywide.

2020 Update: Most recently, the Mayor, through the DC Office of Planning, sent changes to the Comprehensive Plan (1,000+ pages of changes & to the Plan Maps) off for DC City Council review.

The Mayor and Office of Planning seek to substantially rewrite the DC Comprehensive Plan in a way that fails to follow the law and as a gift to the foreign investors and developer-class driving the changes forward without proper progress reports, without supporting data, and considering nothing of COVID-19 or the DC residents being displaced by the dramatic upzoning and numerous very large market rate project popping up around the city.

WHAT WE WANT THE COUNCIL TO DO: 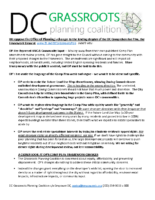 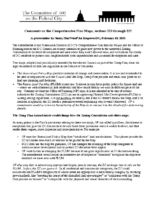 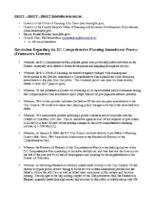